The number one independent festival in the Uk, Bloodstock Open Air has just confirmed Death Metal act, Morbid Angel to their line up in 2011. There are four acts now confirmed and Morbid Angel will join the main stage with Triptykon, Immortal and Rhapsody of Fire. 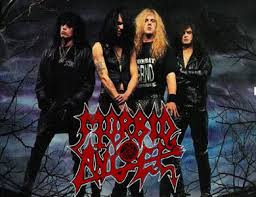 Bloodstock Open Air began as an indoor festival in 2001 when Paul Gregory and Vince Brotheridge met through mutual friends. A company called Amust4music was born and so the start of the festival. BOA is held in Derbyshire and originally was held at the Assembly Rooms in Derby city center. Their slogan, “By the fans, for the fans” was the idea behind the name of the festival which was put out as a competition for the naming of the event. The logo changes every year but will always features a ram which coincides with Derby folk law, based around a ram. BOA didn’t become an outdoor festival until 2005 when the event became a sell out and the indoor festival had its final run in 2006, when it became an outdoor festival only.

The Virtual Festival company awarded BOA with “Best Festival, 15,000” in October this year and they are up for a further two awards of “Best Grass Roots Festival” and “Best Headline Performance” for this year’s event by long-standing act, Twisted Sister.

In little over two months since their tenth anniversary, BOA have been proud to announce the American Death Metal lords, Morbid Angel which is also confirmed as their first and only UK date of 2011. The four-piece from Tampa in Florida consist of David Vincent, Trey Azagthoth, Destructhor, Pete Sandova and Tim Yeung on session drums since this year. The  band have seen a phenomenal amount of line up changes over the years with Trey being the founding member from 1984.

Releasing seven studio albums and one live during their current 26 year career; fans are eagerly awaiting the next installment which the band started work on from June of this year.

iThere are no comments

This site uses Akismet to reduce spam. Learn how your comment data is processed.

Begin typing your search above and press return to search. Press Esc to cancel.